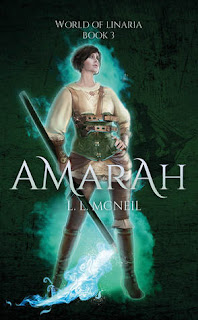 Plot Summary: ‘This treasure’ll make us richer than any Goldstone. All the sky pirates in Estoria, Val Sharis, heck, in all of Linaria would be on their way here if they knew where here was.’
With rampaging dragons and marauding Arillians dominating Linaria’s skies, Amarah’s quest for vengeance against the one who took everything from her seems almost impossible.
When a treasure hunt with a former ally leads to the discovery of a lost Varkain artefact, she’s plunged into the middle of an ancient war between Sevastos dragons, Varkain blood magic, and those who crave these powers for themselves.
Amarah wanted revenge. What she uncovers will change the face of Linaria forever.

I received an ARC of Amarah from the author in exchange for an honest review, but I also bought it!
Find the author's website here.

Find the first book, Moroda, here on Goodreads and here's my review of it.

I bought all three books in the series, and my other half bought both available audiobooks, and she doesn't even read fantasy. My other half using a credit to buy fantasy instead of hard SF is possibly the biggest compliment L.L. McNeil could get.

4.5 Stars. Mostly because I am just one stingy and tight-fisted person when it comes to giving five stars, but that's a different story and tells you more about my penchant for perfectionism than anything else.

This book is superb.

As usual, my review will contain no spoilers.

The World of Linaria is an epic fantasy series with dragons, and who doesn't love dragons? (Uhm, so, you'll laugh, but I'm not the biggest dragon lover, however, I do love McNeil's dragons. They're cool.)

The series has several kick-ass female protagonists, of which Amarah is the one who kicks ass the most.

McNeil writes with a pleasing, straight-forward prose, making the fantasy genre accessible even to people who are not used to sprawling epics with a cast list that is longer than a Dickens novel. In fact, it speaks of McNeil's skill that her world building is creative, intricate, clearly the result of a vast imagination, yet so straightforward that it's perfect for someone who usually shies away from the sheer complexitiy of some of the books out there.

One of L.L. McNeil's many skills is to drip information into descriptions and conversation, and never dump it all on the reader at once.

While the first book, Moroda, is about a young woman who sets out to save her world, Linaria, from a war, Palom and now Amarah dive deeper into the world, lore and characters.

The characters are the series' main strength. They all feel authentic with interesting pasts and promising futures.

While Palom felt a bit slower than Moroda, Amarah is where it all kicks off, and while Isa slowly morphed into my favourite character throughout the second book, it's Morgen whose point of view

I particularly enjoyed in this third book.

Moroda starts off with the typical quest of a young woman who needs to save the world; Palom deals with the fallout of war, diving into the heartbreaking themes of depression and PTSD; Amarah, on the other hand, deals with who we are and how we can be the best version of ourselves.

Amarah's childhood has marked her and turned her into a character who is opportunistic, yet kind with an inherent sense of fairness. She's running from her past, but at the same time her past defines who she is.

All of them - absolutely all of them - Palom, Morgen, Isa, Amarah, Kohl - they all fight to be better, to improve and to bring peace to this world. They're not always sure how to do it. They doubt themselves. They fight their inner demons. They fail. But they're all trying their best.

And that hopeful note, that we can all be better, is what makes this book such an uplifting read.

I would recommend The World of Linaria to anyone who is looking for a new twist in epic fantasy with a character driven plot and dragons - especially to anyone who loves sky-pirates and airships.

Like I said before: McNeil's World of Linaria is a great introduction to fantasy for new fans, but also a treat for old fans of the genre.

And now, I've got but one question: when can I read the fourth book?
By Olivia at July 23, 2019
Email ThisBlogThis!Share to TwitterShare to FacebookShare to Pinterest
Labels: fantasy, l. l. mcneil