The God Game by Danny Tobey 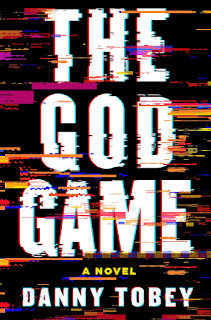 Plot Summary: Charlie and his friends enter the G.O.D. Game, a video game run by underground hackers and controlled by a mysterious AI that believes it’s God. Through their phone-screens and high-tech glasses, the teens’ realities blur with a virtual world of creeping vines, smouldering torches, runes, glyphs, gods, and mythical creatures. When they accomplish a mission, the game rewards them with expensive tech, revenge on high-school tormentors, and cash flowing from ATMs.
But then the threatening messages start. Worship me. Obey me. Complete a mission, however cruel, or the game reveals their secrets and crushes their dreams. Tasks that seemed harmless at first take on deadly consequences.
Who else is playing this game, and how far will they go to win?
And what of the game’s first promise: win, win big, lose, you die? Dying in a virtual world doesn’t really mean death in real life—does it?
As Charlie and his friends try to find a way out of the game, they realise they’ve been manipulated into a bigger web they can’t escape: an AI that learned its cruelty from watching us.
God is always watching, and He says when the game is done.

I received a free copy from the publisher.

What did I think?
I love game fiction, and I enjoy science fiction, which is why I thought I'd absolutely love The God Game, unfortunately, I didn't really warm to it.

Let me talk about the positive things first. I adored the theme of free will and how choice in the game end up having real life consequences.

The characters are constantly tempted to make awful decisions and sacrifice their friendships in order to advance their own lives. Tempting, of course, especially if you might think (at least at first) oh, it's just a game. Once the reality dawns on them, it's far too late.

Throughout the book the characters are faced with moral choices and must decide which path to take.

The AI in this book is magnificent, manipulative, outright evil and chilling. But it always leaves you a choice. Free will, remember? That the AI is the best part of the book is not surprising considering the author is an expert in AI.

Now, I'll have to talk about the bits I liked less. The characters are mostly two-dimensional, and perhaps I'm too old, but they were all a bit whiny. Some of their secrets they harboured felt silly, and I didn't empathise with all of their problems.

In fact, I found them quite simplistic and juvenile, overall. And it rendered the book more YA than the blurb suggested.

I didn't gel with the writing either. I found it too straightforward, too simple. It lacked real depth and felt juvenile in places, just like the characters.

To end on a positive note, this book is incredibly fast-paced, and there's never a dull moment. The cast is incredibly diverse, and none of them feel like token characters. With its simple prose The God Game promises to be a fairly quick read and is the perfect company for a rainy weekend.

I recommend The God Game to all LitRPG and Game Lit fans. Take a look at the Look Inside excerpt on Amazon, it either sucks you in or not. If it does, you'll love this. 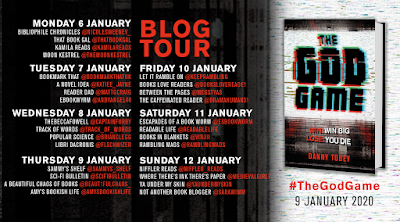 This blog post was part of the Gollancz Blog Tour. Make sure to check out all other posts.

By Olivia at January 11, 2020
Email ThisBlogThis!Share to TwitterShare to FacebookShare to Pinterest
Labels: danny tobey, sci-fi