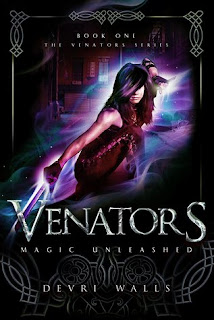 Plot Summary: Six years ago, Grey Malteer was attacked by creatures he thought couldn’t possibly exist. They repeated a word, calling him a name he’d never heard before: Venator. Since then, his life has been a hellhole of secrecy—hiding old pain alongside strange new abilities.
Rune Jenkins has an itch, as she calls it, but it’s more than that. It's an anger that builds up like the inside of a boiler whenever she’s around anything remotely supernatural. The pressure is growing steadily worse and she can’t understand why. All she knows is—her control is slipping.
By order of an unknown council Grey and Rune are pulled through a portal in the St. Louis arch, landing them in an alternate dimension where creatures of myth and legend exist. A realm that calls them, Venators.
Made up of centuries old fae, vampires, werewolves, elves and succubi the council’s corrupt nature becomes obvious as they seek to wield the newly returned Venators as weapons.

Wedged in an impossible position, Grey and Rune must decide their fate—do they go against the council’s wishes and help the innocents of this unforgiving land, or face the possibility of execution by the council.

This post is part of a blog tour for @WriteReadsTours 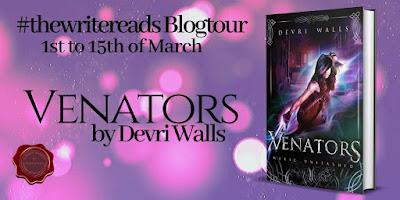 Devri Walls is known for her ability to write a gripping story filled with imaginative world building and compelling characters in a voice that is engaging and pleasant to read.

The blurb for Magic Unleashed sounds incredible, and I'm a huge fan of alternative dimensions and portal fantasy.

The world building is a bit of a kitchen sink with fae, vampires, werewolves and other myths all in one, but it works, especially since Walls is great at writing action and suspense. Her voice is easy, straightforward, inviting the reader to fly through the book.

The characters are engaging, but at first I worried that I wouldn't like Rune. She comes across as immature, and that sort of character is one of my pet peeves in Young Adult fiction. However, she quickly grows, finds strength and bravery, and proves herself.

In Magic Unleashed, Walls focuses on compelling themes such as bravery and kindness, but most importantly on self-discovery.

I must admit, I'm not the intended audience for this book, and while I found Magic Unleashed an enjoyable read, I probably wouldn't read the rest of the series. I flew through the book, and found the twists and turns gripping (albeit somewhat predictable), but I didn't emotionally connect with the characters as well as I would have liked.

I recommend this book to fans of Sarah J. Maas, Cassandra Clare and Illona Andrews.
By Olivia at March 03, 2020
Email ThisBlogThis!Share to TwitterShare to FacebookShare to Pinterest
Labels: devri walls, fantasy, young adult