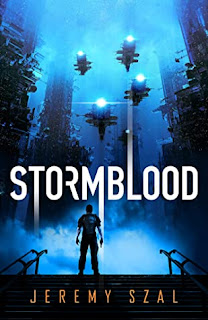 Plot: Vakov Fukasawa used to be a Reaper, a bio soldier fighting for the intergalactic governing body of Harmony against a brutal invading empire. Now, he fights against the stormtech: the DNA of an extinct alien race Harmony injected into him, altering his body chemistry and making him permanently addicted to adrenaline and aggression. It made him the perfect soldier, but it also opened a new drug market that has millions hopelessly addicted to their own body chemistry.
But when Harmony tells him that his former ally Reapers are being murdered, Vakov is appalled to discover his estranged brother is likely involved in the killings. They haven’t spoken in years, but Vakov can’t let his brother down, and investigates. But the deeper he goes, the more addicted to stormtech he becomes, and Vakov discovers that the war might not be over after all. It’ll take everything he has to unearth this terrible secret, although doing so might mean betraying his brother. If his own body doesn’t betray him first.

I wanted to read this book because of the themes it tackles.

Firstly, Stormblood talks about drug addiction in an incredibly clever and futuristic way. Stormtech is DNA harvested from an extinct alien race that allows its user to become the perfect soldier, but they pay a price: addiction to aggression and adrenaline.

Secondly, I am a sucker for loyalty, chosen (found) families, and brotherhood. (I also love me some extinct ancient alien race.)

I'm not the biggest fan of military science fiction and prefer space operas to hard SF, but I was pleasantly surprised to discover the themes of friendship and brotherhood are far more important to this novel than any of the action scenes. That's not to say there aren't any action scenes. Stormblood offers plenty of incredibly well written action.

And that's probably my only complaint, and also an outright 'it's not you, dear book, it's me,' - I'm not a fan of lengthy action scenes and during certain scenes I was beginning to skim...however, every time I did, Szal almost immediately managed to capture my attention again.

When I read a book, I don't see the scenes played out in my head, so for me it's hard to stay engaged reading fighting scenes. Just tell me who won, okay? Obviously, that's never the book's fault, and I must say Stormblood's action scenes are incredibly lively and well written.

Szal's prose is smooth and his descriptions are vivid. The world is rich and layered. Exploring it reminded me of the times I was playing Mass Effect.

Vakov is a relatable character with a damaging and traumatic past and his voice is unique. I cared for his well being almost from the start. He is witty, sarcastic and clever. An addict fighting his inner demons and riddled with PTSD. I can't think of a more intriguing and interesting protagonist.

Stormblood is a fast-paced debut, set in a vivid world, filled with brotherhood, comradeship, loyalty, and chosen family.

I recommend it to every science fiction fan who is intrigued by the premise. (And why wouldn't you be?)
By Olivia at June 30, 2020
Email ThisBlogThis!Share to TwitterShare to FacebookShare to Pinterest
Labels: jeremy szal, netgalley, sci-fi