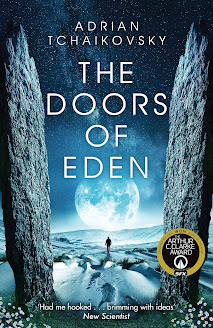 Plot: Four years ago, two girls went looking for monsters on Bodmin Moor. Only one came back.
Lee thought she’d lost Mal, but now she’s miraculously returned. But what happened that day on the moors? And where has she been all this time? Mal’s reappearance hasn’t gone unnoticed by MI5 officers either, and Lee isn’t the only one with questions.
Julian Sabreur is investigating an attack on top physicist Kay Amal Khan. This leads Julian to clash with agents of an unknown power – and they may or may not be human. His only clue is grainy footage, showing a woman who supposedly died on Bodmin Moor.
Dr Khan’s research was theoretical; then she found cracks between our world and parallel Earths. Now these cracks are widening, revealing extraordinary creatures. And as the doors crash open, anything could come through.
What did I think?
Adrian Tchaikovsky is one of my must-buy authors. He effortlessly moves between science fiction and fantasy, and he makes it look easy. His vast imagination is mindblowing, and his ideas always turn into fascinating thought experiments.
Unlike Children of Time, Doors of Eden probably isn't considered hard science fiction since it deals with parallel worlds and some of what slips through the cracks and into our world is beyond what we can possibly imagine.
Those familiar with Tchaikovsky's work won't be surprised to hear that there's an immense amount of evolutionary biology within these pages. And some of the creatures have far too many legs.
Let me be blunt: if evolutionary speculation and the analysis of how life on our world could have evolved differently isn't your jam, then this book is not for you. If, however, you enjoy evolutionary thought experiments and always wanted to know what the world would look like if there were more lemurs or giant centipedes, then pick Doors of Eden up right now!
Tchaikovsky delivers a very diverse cast. I always enjoy reading about lesbian and trans characters that feel fleshed out and three-dimensional.
I'd argue that Doors of Eden is possibly a bit on the nose politically. Tchaikovsky's worldviews basically drip from the pages, but I'd say the same is true for Children of Time and its sequel.
While the plot and especially the many parallel worlds are complex, Doors of Eden never feels overwhelming. My knowledge of science is a tad lacking to say the least, yet Tchaikovsky never lost me. It's a compelling read and despite its size I read it in two days because I simply didn't want to put it down.
I recommend this book to everyone who has an interest in parallel worlds and sometimes stands in front of the mirror wondering how different the world might look today if evolution had gone a different way. (Yes, yes, I do that. Poor mirror probably thinks I'm a bit...odd.)
I mean the New Scientist reviewed it and that is not the place I usually look for my next read.
Basically: read this! It's one hell of a ride.
By Olivia at August 27, 2020
Email ThisBlogThis!Share to TwitterShare to FacebookShare to Pinterest
Labels: adrian tchaikovsky, ARC, diversity, sci-fi