Every Sky A Grave by Jay Posey 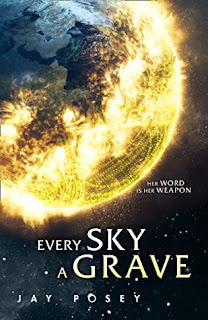 Plot: Mankind has spread out and conquered the galaxy by mastering the fundamental language of the universe. With the right training, the right application of words, truth itself can be rearranged. Language is literally power.
Peace reigns now. Order reigns.
For if a planet deviates too far from what the authorities plan, an agent is sent out to correct that. To quietly and with great skill, end that world.
One such agent is Elyth – a true believer.
But on a clandestine mission to stop an uprising before it can truly begin, Elyth comes to realise she hasn’t been told the whole truth herself. There’s so much she doesn’t know. How can there be people whose truth is different to that of the authorities?
Elyth’s faith in the powers that be is shaken just when she needs it most. While on her mission, a dark and unknown presence makes itself known at the edges of the galaxy – and it cannot be controlled, for nobody knows its name.

Every Sky a Grave was my first time reading anything by Jay Posey. The fact that language is power in this world won me over. The cover is beautiful, and the publicist said it's perfect for fans of Mark Lawrence. (Although I must admit that I don't really see the similarities, apart from maybe the prose.)

Posey is a skilled writer. In fact, the prose is what I liked most about this book. At times, it was like reading poetry.

The world building is intricate and creative and reminded me of the epic scope of Alastair Reynold's House of Sun.

The protagonist is a smart, knowledgeable and curious woman. She's intelligent and I quickly found myself rooting for her. She's fiercely independent, loyal at first but grows into her own as the plot progresses.

Unfortunately, I thought the middle dragged somewhat, and I struggled coming back to this book.

The ending, however, is strong and I'm definitely interested in reading the sequel.

This is an intriguing science fiction novel for fans of Alastair Reynolds who don't mind a slow middle.