Every Star A Song by Jay Posey 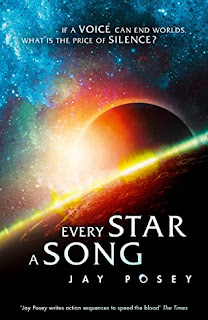 Plot: Far in the future, human beings have seeded themselves amongst the stars. Since decoding the language of the universe 8,000 years ago, they have reached the very edges of their known galaxy and built a near-utopia across thousands of worlds, united and ruled by a powerful organization known as the Ascendance. The peaceful stability of their society relies solely on their use of this Deep Language of the cosmos.
Elyth—a former agent of the religious arm of the Ascendance, The First House—is on the run after the events of Every Sky a Grave, when she and the fugitive Varen Fedic exposed the darker side of Ascendance hegemony on a planet called Qel. Though she just wishes to put the past (and Varen) behind her, she is soon tracked and cornered by the Ascendance agents. Surprisingly, they aren’t there for punishment. Instead, they offer her a deal in exchange for her help in exploring a new planet that seems to have appeared out of nowhere. If she agrees, her sins against the Ascendance and the First House will be forgiven.
Elyth reluctantly agrees to join the team of elite agents (including some former allies-turned-enemies) but almost as soon as they touch down on the planet’s surface, things start to go awry. Strange sounds are heard in the wilderness, horrifying creatures are seen stalking the forests, and even the landscape itself seems to change during the night.
But as expedition members start dying, two things become clear: the planet is conscious, and it’s trying to kill them.

Every Sky a Grave was my first ever read by Jay Posey, and I really enjoyed it, despite the rather slow middle.
Posey is an incredibly skilled wordsmith. In fact, the prose is what I liked most about The Ascendance Series. It's descriptive and at times, it was like reading poetry. It's obvious that every word is chosen with care.
The Deep Language is such a clever idea. As a reader, the fact that language is essentially unlimited power in this world won me over.
Overall, the world building is intricate and creative, reminding me of the epic scope in Alastair Reynold's work (especially House of Suns). While Posey took great care in developing his setting throughout the first book, the world building takes a backseat in the second book. Every Star A Song is much more fast-paced - there is no slow middle - and almost the entire book is filled with action instead.

It definitely makes for an easier read.

The protagonist, Elyth, is a smart, knowledgeable and curious woman. She's intelligent and I quickly found myself rooting for her. She's fiercely independent, loyal at first but grows into her own during the first book.
In Every Star A Song, Elyth has to give up some of her independence and work together with a team to solve the mystery of the planet that has appeared seemingly out of nowhere. The supporting cast is made up of intriguing characters, and I enjoyed the dynamics among the rather uneasy companions.

I recommend The Ascendance Series to all science fiction fans who don't mind a touch of fantasy in their books.
By Olivia at November 01, 2021
Email ThisBlogThis!Share to TwitterShare to FacebookShare to Pinterest
Labels: jay posey, sci-fi