The Thirteenth Hour by Trudie Skies 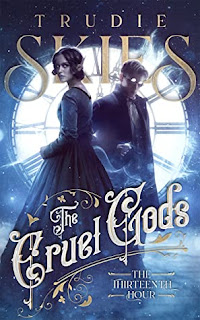 Plot: Cruel gods rule the steam-powered city of Chime, demanding worship and tribute from their mortal subjects. Kayl lost her faith in them long ago, and now seeks to protect vulnerable and downtrodden mortals from their gods’ whims. But when Kayl discovers powers that she didn’t know she had—and destroys a mortal’s soul by accident—she becomes Chime’s most wanted.
Quen’s job was to pursue sinners, until the visions started. Haunted by foreboding images of his beloved city’s destruction, Quen hunts soul-sucking creatures made of aether who prey on its citizens—and Kayl is his number one target.
To ensure Chime’s future, Kayl and Quen must discover the truth of Kayl’s divine abilities before the gods take matters into their own hands.
For a city that bows to cruel gods, it’ll take godless heathens to save it.
What did I think?
I was one of the beta readers, so I'm probably biased, but look at that cover! It's so gorgeous.
"Time had run away from me again, but I couldn't afford to let it escape, not today."
The book opens with Kayl being late. Again. But even though she's chasing a tram right away, The Thirteenth Hour is fairly slow-paced at first as Skies takes her time to build her world.
It's a wonderful world, clever, innovative - a world I've not seen done before. It's also a fairly complex one, and it took me a few chapters to find my bearings.
There are twelve domains, twelve gods, and twelve mortal races. It's a lot, but damn if it isn't one of the most fascinating worlds I've ever had the joy of discovering. Then there is Chime, a mortal city where the gods cannot tread.
The social structure and hierarchy, and Skies' critique of it is executed in a subtle yet impactful manner. While the author's disdain for Victorian Workhouses (and their modern counterparts) is practically spilling from each page, Skies' social commentary is cleverly packed into a fun fantasy adventure with loveable characters.
The Thirteenth Hour is told from the point of view of Kayl and Quen, both written in the first person (the first switch confused me, but after that I could quickly tell them apart thanks to Skies' distinct prose).
Kayl is a bit of a scatterbrain with a healthy dose of sharp wit. She embarks on a journey of self-discovery, staying true to her principles and beliefs throughout the book. "If I was a pious woman, I'd be praying. But I was a Godless woman, and the gods left me to dictate my own fate."
Quen, on the other hand, is a quirky gentleman dork, and I love him. He likes a biscuit with his tea, and I'd adopt him and offer him our guest room any day. He's just so charming, albeit a bit grumpy at times, as well as incredibly tortured by his past, which makes him even more charming. "The tea they'd offered me was serviceable at best. [...] Things could have been worse. They could have offered me coffee."
Yes, there is some romance, but it's a wonderful romance and I'm here for it! (Which is a rare thing for me to say, I know!)
The writing is - I've been trying to come up with a way to describe it - devilishly charming, filled with the very best Britain has on offer (tea and biscuits and more importantly, "Thou must not violate the sanctity of the queue!") and also British humour. British humour is arguably the best in the world (don't @ me)!
On a more serious note, Trudie Skies' writing is incredibly charming and witty. The prose is easy to read and even the slower parts flow smoothly.
And before you know it, you're reading the second half of this wonderful book, and suddenly the pace picks up, throwing one twist after another at the unsuspecting reader.
Need more reasons to read The Thirteenth Hour? Read this blog post written by the author herself, which will give you a whole thirteen reasons! The most important ones that I haven't mentioned yet? LGBT+ representation and the found family trope! (The found family trope is one of my favourite tropes out there, and it's incredibly well done here.)
I recommend The Thirteenth Hour to all fantasy readers who enjoy character-driven gaslamp or steampunk stories.
By Olivia at October 13, 2021
Email ThisBlogThis!Share to TwitterShare to FacebookShare to Pinterest
Labels: fantasy, trudie skies